Last year I was fortunate enough to gain an entry into the 2015 Ride London 100 Sportive via the ballot and despite riding head first into a St Johns ambulance paramedic whilst riding up Box Hill I thoroughly enjoyed the whole weekend and was keen to do the event again this year.

I entered the ballot for the 2016 event but unfortunately didn’t get selected so my only option to get a place was via one of the many charity places. I decided on Breast Cancer UK due to several family members being diagnosed over recent years.

So fast forward to the day before…

Ride London 2016 requires riders to register the day before at the Expo Centre in the London Docklands despite long queues this all went without a hitch.

Riders are allocated a start time based on their estimated finish time (although some riders obviously overestimate their abilities) and have to be in a designated pen according to that time.  With my start time of 6.30 I had to be in the pen by 5.50.  I left the hotel at 5.30 joining an ever increasing number of riders making their way over to the Olympic Park start area. It’s quite interesting seeing car driver’s response to so many cyclists on the road as they are definitely in the minority for once.

I managed to catch up with a good friend and client, Tom Smith, and a friend of his who were also doing the ride.

When our pen started it’s an amazing sight and feeling to experience so many cyclists all making their way through the centre of London past the city’s sights without having to worry about cars as it’s a closed roads event.

Our plan was to take it in turns to take the lead with the other two sitting in line behind which gives them a slight respite and opportunity to eat and drink.

The highlights of the ride are the ascent of Box Hill (this time without any paramedic incidents), the descent off Leith Hill (very fast!) and the final run into the city past Trafalgar Square and then onto the Mall to finish in front of Buckingham Palace.

We managed a time of 4 hours 59 minutes for the 100 mile route some 20 minutes quicker than last year. 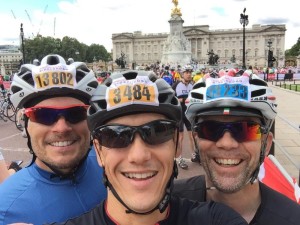 I have entered the ballot again for the 2017 event and managed to raise £450 for Breast Cancer UK this year.

One point to note when making charitable donations is the additional higher rate tax relief available to the donor something that clients tend to forget about when sending us their tax return information. The donation increases their basic rate band reducing the higher rate income tax paid.

Hello, is it me you're looking for? Emails.... It's an everyday communication tool... Its great for having things in w...

He Did It!! Here it is - the finale picture with their bling!Well done to an amazing pair! (of nut...

Day 7 Here it is... the final day... The victory lap will be a final challenge to put to the test...

Day 6 Today sees everyone in Squamish.  This is the final big day ride... if they've got the legs...

The Golden Oldie Celebrates in Style This year marks Rob's half century!  ...

Just before I started my first job back in summer 1983 my mum and dad used to give me £1 a week pocket money now whilst th...